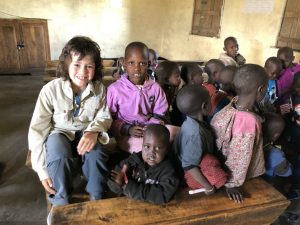 5:30 am: “I am pouring the water now,” huffs Hassan, our butler, his breath labored by the weight of the hoist.  He has to pour 40 liters of water into the tarp bucket and hoist it about 10 feet in the air. “It is ready,” he confirms. I pull one of the two ropes in the shower and the water drizzles. I am freezing. The temperature inside our tent resembles a cold, late autumn morning with no heat.

I’m sure he is cursing me when my water runs out. “Hold on. I need to add more water,” he says.  I pretend (to myself) like I’m going to wash my hair but the truth is the drizzle of the water is barely enough to wash my arm pits and there is no way I will ever get shampoo and conditioner out of my hair with this drip.  Besides, I’m freezing inside the shower but poor Hassan is outside waiting for me to finish! Dirty, sandy hair in a clip for two days it is. All is good. 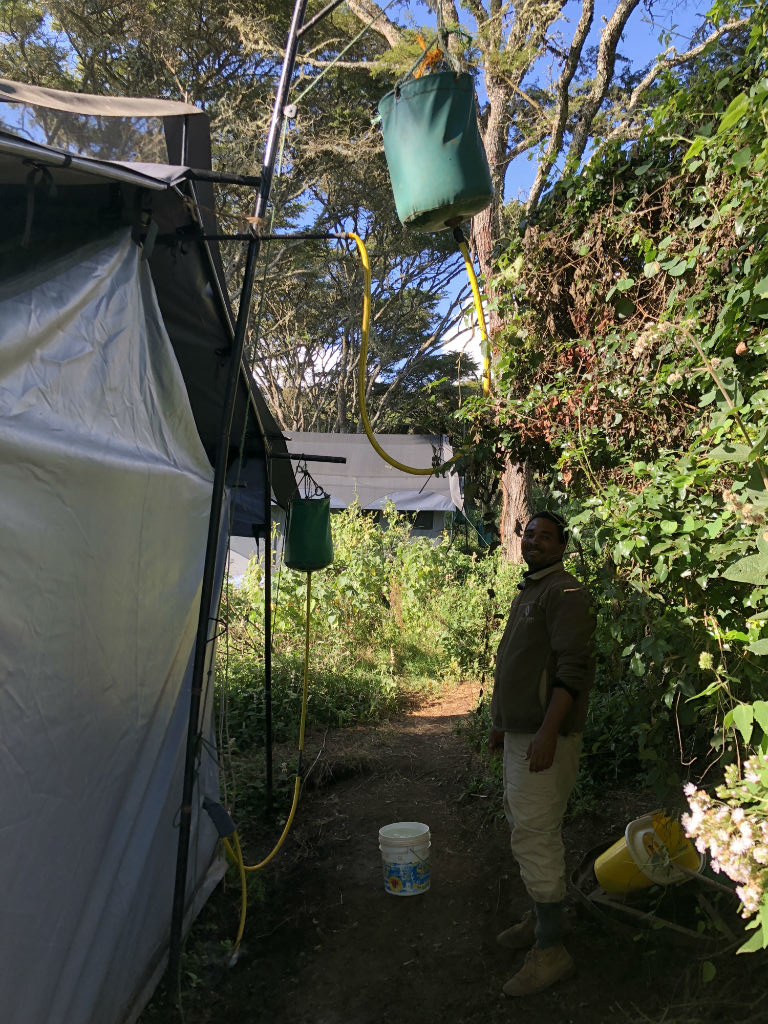 The temperature is significantly colder at Ngorongoro. We travelled high above sea level to our camp and will eventually make our way down into the crater itself. I am appreciative of the electric blanket they use to warm up our beds each night and the hot coffee they bring to us each morning. For the first time this trip we were actually on time to meet Spiros. Stefano suggests, “We always need a bucket shower to be on time.”

It is a bumpy, curvy, dirt road leading us down, down, down into the 302 sq km crater.  The sand is a fine, reddish brown similar to Sedona, Arizona. It decorates the trees and shrubs that line the local roads as a result of the vehicle wheels that scatter it about. The ride is so bumpy it reverberates through your body.  At the end of each day I have sea legs, the same sensation you have as if on a boat. The floor is moving and my equilibrium has been rocked.  The crater landscape is flat with brown dried grasses, volcanic type rocks pitted through years of exposure to the elements. Black cotton soil is a mixture of higher soils and nine different volcanic eruptions over millions of years. Spiros stops and our heads immediately lift up. What is it? He rolls down the window and picks Bushman Tea Leaves– smells of soft mint and sage. The tribal folk make teas with them but he tells us he can’t cook and has no idea how they do it.  At least he’s honest!  Acacia Trees are a common tree that we see throughout. 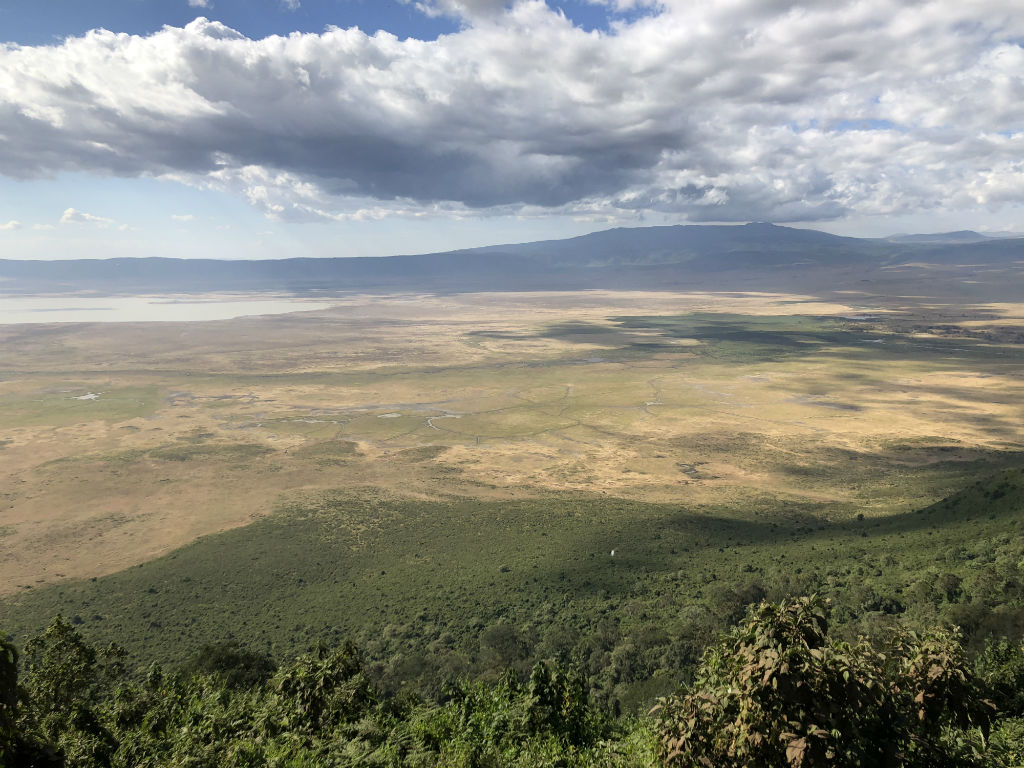 We were so close to seeing a real live Lion vs. Buffalo epic battle. There was a pride of male and female lions resting near the water with their cubs. The tan, dried grass is camouflage from their prey and they are smart: sooner or later their prey will need to drink. At this moment they are awake but not overly active. We drive through the running water to the other side. We stop and watch again. We spot buffalo in the distance grazing closer and closer. The strongest female lion rises to her feet. She slowly makes her way to the sunken ravine out of sight from the buffalo. She lays down flat to take cover. The buffalo continued to move unknowingly towards her. A second lioness rises to her feet and positions herself nearby.  A third lioness positions herself. Was this really going to happen? They are patient. One, two, three buffalo pass the lying lioness. The lions remain still. Buffalo four and five pass her. We wait with anticipation. The males wake now too. Their manes proves too much evidence of a hunt to their prey. “They use the power, not the brain,” says Spiros. The males step in to close the deal, or take the prey down. She launches out from her cover and the buffalo run. She chases them, running, running but quickly realizes they are too far. Buffalo give a very good fight to the lion that is strong but slow. Buffalo are incredibly strong and fierce. They run off in the distance. They stop and graze- until the next interaction.

Herds and herds of Wildebeest roam the lands. They are an odd looking type – the “spare parts” of all the animals: body of a horse; face of a buffalo; stripes of a zebra; tail like a giraffe. 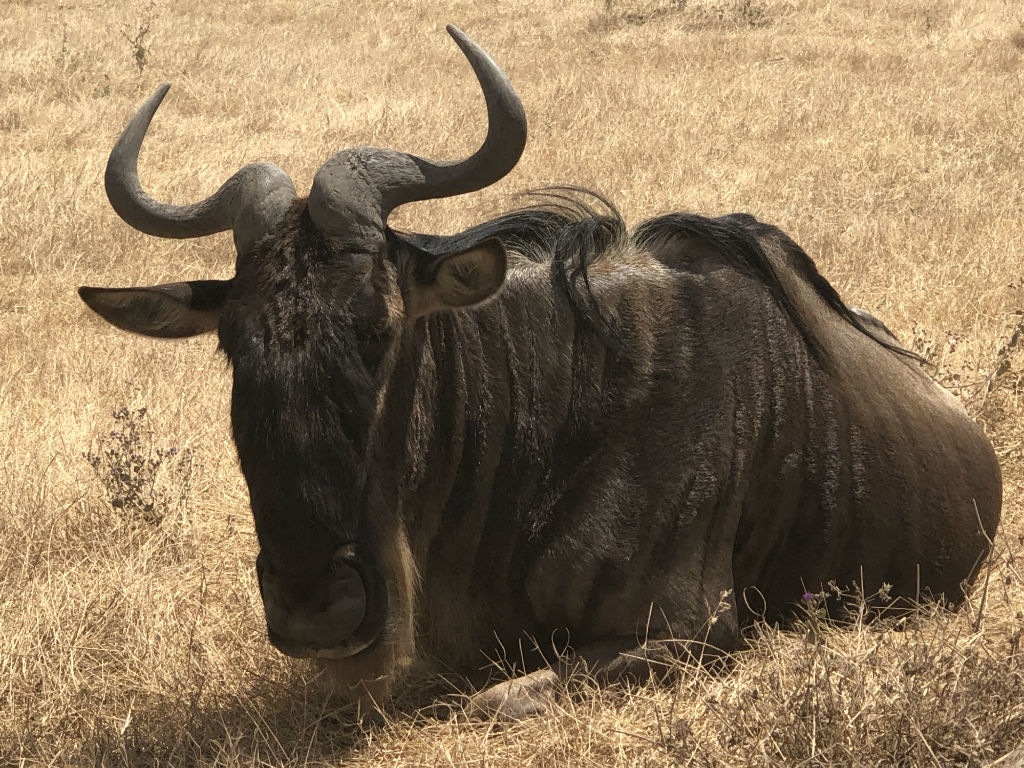 The rhinos wear radio transmitters so the Rangers can watch them at all times to prevent poachers as well as protect them from elephants and lions. They are highly endangered with an estimated 3000 of black rhinos in the world and only 36 in the crater.

Ostrich dancing for a female but it appears she may have a headache. He shakes his feathers moving closer to her.  “And he keeps on dancing by himself,” says Spiros.

The Buffalo here give strong meaning to the phrase, you are what you eat. They are a slightly different color here in the Crater, have bigger bodies and bigger horns. They have adapted to the environment of the Crater surrounded by highly nutritious grasses which fuels them.

The lion here have bigger manes to protect them from the cold, as opposed to those in Tarangire National Park where it is hotter and their mane is much thinner hair and less full.

We picnic at the spring water hippo lake. By picnic I mean teak table covered in African textile and teak chairs with leather seats. “Glicnic” – it’s the form of picnic that accompanies glamping. 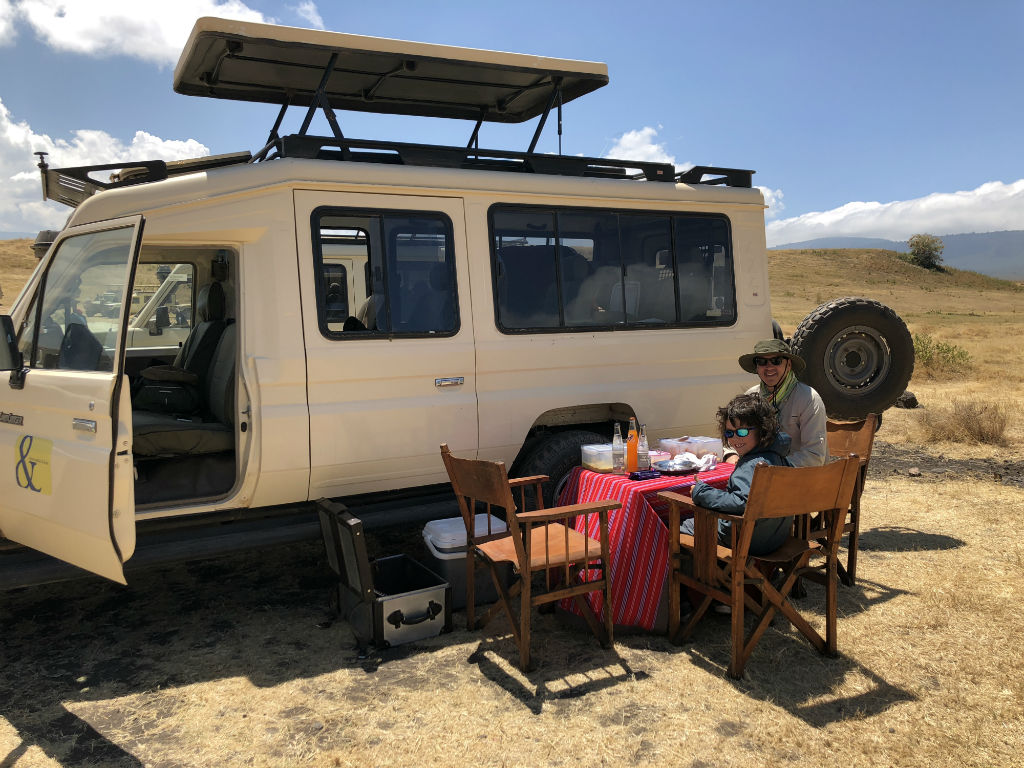 In the afternoon we take a visit with the Masai tribe. They are a people of the land; rich with tradition and primal with their lifestyle.  We arrive and are welcomed with a traditional Masai dance and are invited to join in. They drape each of us with a Masai shawl, Stefano and Luca receive a pole and I am decorated with a headpiece and jewelry. Tribal chanting and varying pitches from the males and females young and old fill the air, the bouncing and jumping almost choreographed. 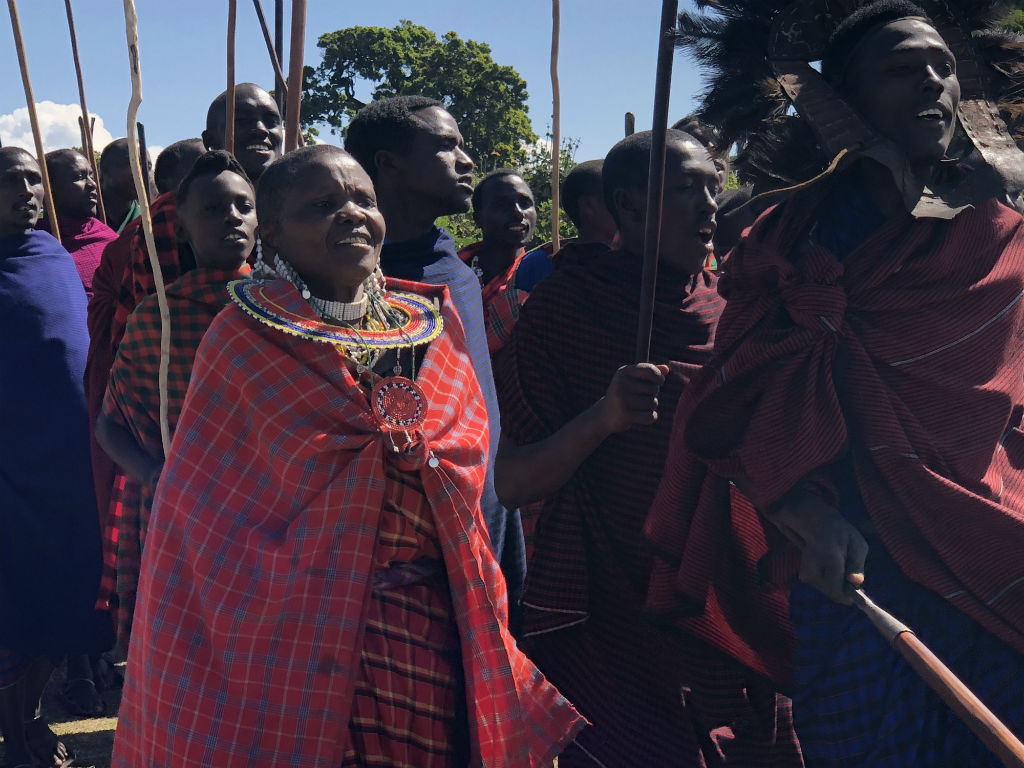 We watch three Masai men start a fire. It is a strong team effort and they know precisely when to jump in and help their brother. Using a flat piece of wood with a carved c shape on the ground, they place the tip of a 12” piece of round wood stick inside the c and holding the stick rub it back and forth inside their hands fast, fast, fast. When their brother sees they tire, he jumps in and begins to rub, and so on. There is smoke and  hot ash falls onto the leather patch underneath the C. One minute and twenty eight seconds later the smoke is profound. A tribal member places a piece of dry grass on it and lifts it to the sky to get some air- the fire has been made!

Next, we visit a traditional Masai hut. The hut is made of wood and grasses.  Cow dung is used to cement everything together. Round holes each the size of a coffee saucer make for windows but even in the middle of the day it is black as night inside. The ceiling peaks in its center so standing is cautionary. Shelves hold the two pots used for cooking and the three mugs used for drinking. A small “closet” of sorts holds other household storage.  A small fire burns in the center creating unbearable heat for the warm day outside but here in the crater the temperature drops sharply at dusk and the tarps used as their beds will quickly be cooler. 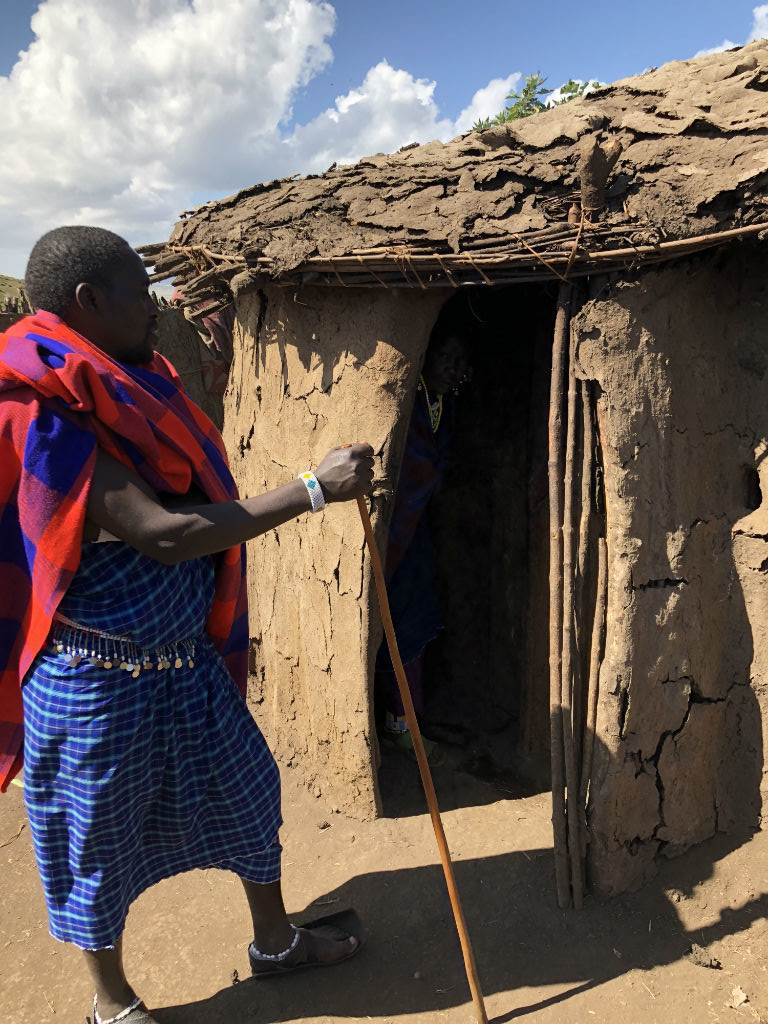 We are led back to daylight and offered to shop their bazaar of handmade beaded items: earrings, coasters, safari animals, African jewelry. Money earned from each piece is divided between the tribe and the artist who created it. The women are working hard to push their products and seemingly offended if you do not choose their item.  “Buy from the heart,” says the tribal elder, but it is difficult not to be swayed by their persistence seeing how they live. We settle on some goods and must now negotiate with the tribal elder. As you can suspect the items are overpriced. I slightly negotiate to demand a mutual respect however I am very much aware the payment is a donation to their livelihood and so getting a bargain is not my objective. 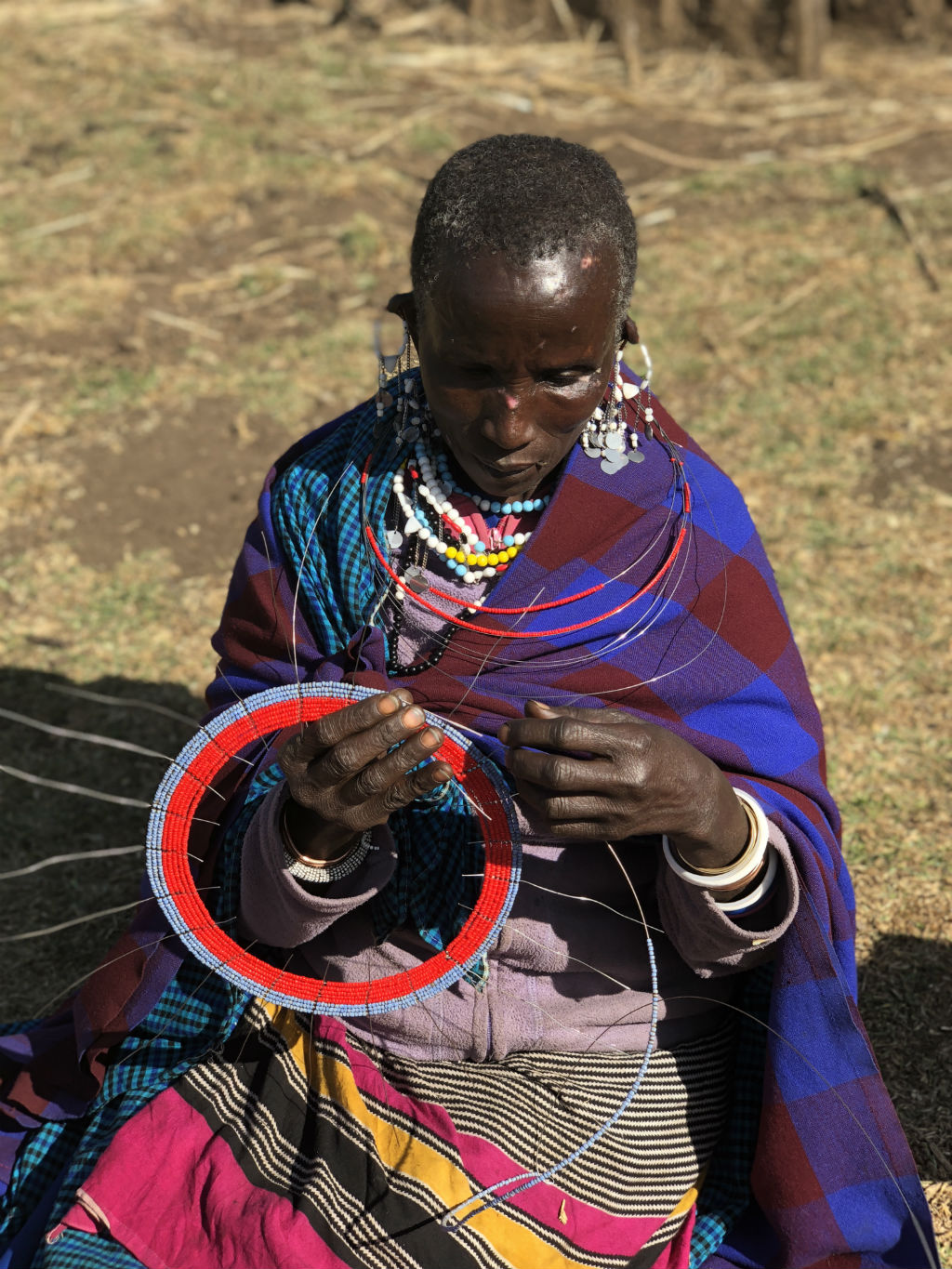 Masai woman creating one of her decorative neck pieces

We walk on to the Kindergarten school brimming with curious, smiling faces. They sing us a local song welcoming us to their village. They are not yet dressed in tribal garb but rather dirty shirts and pants, all of them barefoot.  They are learning three languages: Masai, the language of their tribe;  Swahili, their national language; and English. With increased exposure to different ways of doing things, the tribe is encouraging education and cultural enlightenment so that these news ideas can be shared within the camp. Next year the children will walk 5k each way to their primary school.  We share the school supplies we brought and the children are vying for one Crayola marker each. Luca helps hand out the markers. Some of the older kids are hiding their first to take a second. He must tell them they already have one marker and move on to the next.  Typical childhood behavior no doubt, except the feeling is much different here. 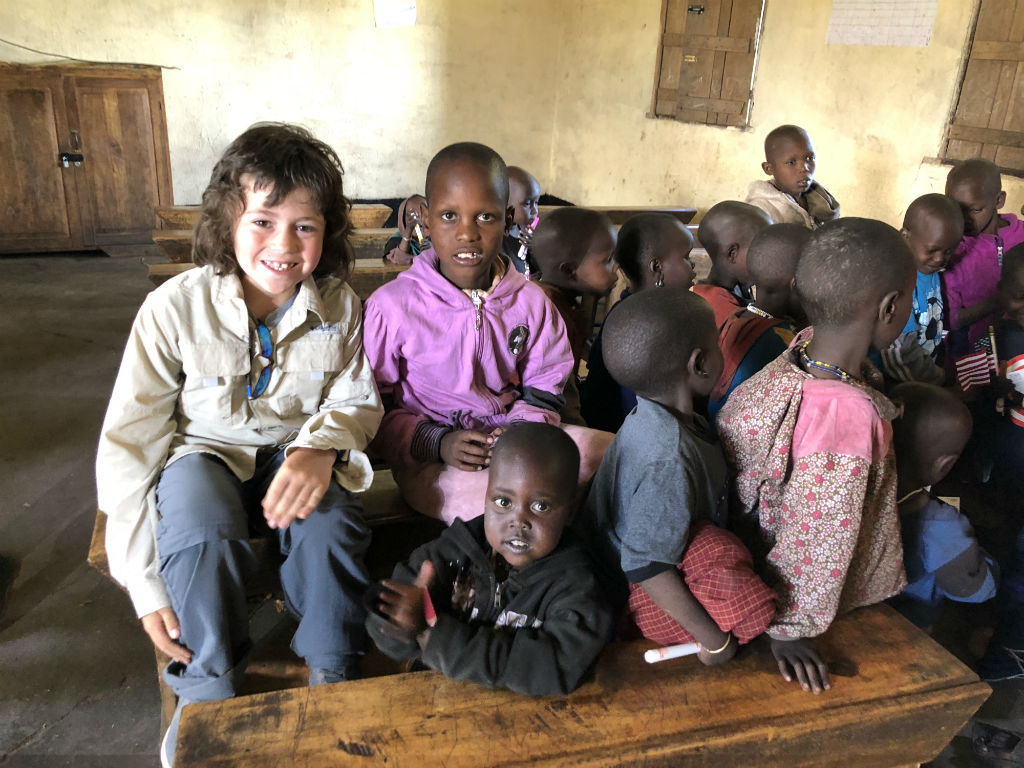 Luca inside the Masai school house with the students.

We wave goodbye and head back to the vehicle, quiet and reflective of what we just experienced.

Back at the camp we decide to take a bucket shower tonight because light is plentiful and so is the sun! In the Crater, when dusk sets in the temperature drops quickly. We pack for our flight to Serengeti and enjoy a glass of wine on our porch before dinner.

Q. What is the name of a group of warthogs?