Quite the Abu Dhabi Birthday Celebration

My sweet little love and I are awake at a mere 5am. He rolls over and looks me in the eye. “Happy birthday mommy! Do you want to chitter chatter? I can’t sleep!” The best start to my day! Since I skipped dinner I wake starving. I am dreaming, literally, about the asparagus I saw yesterday morning in an omelet that will melt in my mouth today. When we arrive at the dining room and asparagus is not an option I am deflated! (Ok, first world problems I know, but throw a girl a birthday bone!)  It may have been the ridiculousness of the fact that I actually told the chef I was dreaming of an asparagus omelet but he willingly obliged and delivered it with a festive Happy Birthday written in ketchup! With cards from my loves, my heart is full. “I love yo mama and yo mama loves me,” wrote Luca. So true.

There is a chill, modern-vibe type of music playing in the background at the hotel. It’s so chic. I continue to take in the detail of everything from the 100 thin, glass vases with fresh flowers hanging in the lobby to the decorative marble trim around the doors to the prints on the quilted toilet paper. 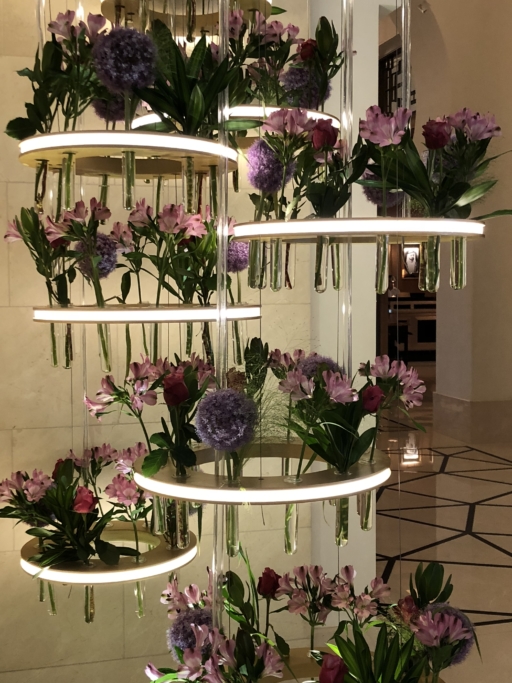 We are greeted by our Pakistani born guide Azgar, who was raised in Dubai. I later learned his name was not Azgar but rather Oscar. Blame it on the accent. Blame it on jet lag. I misunderstood! We have a day ahead visiting Abu Dhabi- about an 80 minute ride from Dubai. Oscar was full of personality and so educational. We loved learning all the unique facets of this Arabic culture.

Abu Dhabi is ruled by a Crown Prince and is a kingdom not a democracy.  Citizenship is never granted to those born outside the United Arab Emirates. Each of the Emirates is ruled by a Sheik (or Vice President).  When oil was discovered in Abu Dhabi in the 1960s there were seven tribes of nomads living in the desert – friendly but separate tribes. At that time each family took a different region to rule until the Crown Prince announced they should all work together as one united emirate and thus became independent in 1971. 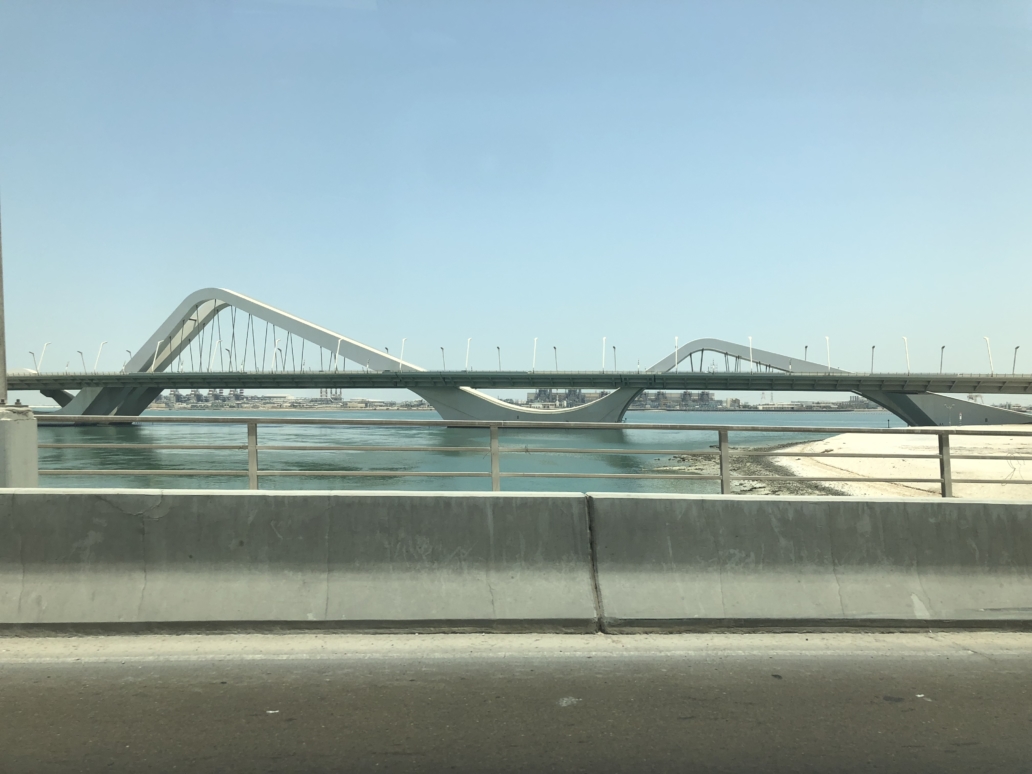 Sheikh Zayed Bridge; the curves emulating those of the desert dunes

The order of beliefs in this land is God, Land, King. They believe in taking care of their own citizens. For example, at Ramadan the Crown Prince relieved all debt of all citizens! (I might even like Donald Trump if he delivered such a gift for the American people!) When you marry in the Emirates, the new couple gets a free house and all its bills paid for! It’s no wonder no Emirate citizen has forgone their citizenship and changed their passport.

Expats, while welcomed and making up 85% of the Emirate, must receive sponsorship for work. In the event they lose their work, they have three months to find a new job before they get shipped back. Oscar seemed to believe part of the way the government gets their money is through expats- they have to pay for everything.

Abu Dhabi is 80% desert and Dubai has its fair share as well. So interestingly, there is often (if not always) a light dust and haze alongside a reflective white-ish blue sky. Picture it, a white sky.

We visited the Sheikk Zayed Great Mosque of Abu Dhabi, the 3rd largest mosque in the world with total capacity of 40,000 worshippers. The Mosque sits within a beautiful complex adorned with more marble than Carrera, Italy. Ironically, few people were actually praying there. The population was mainly visitors. I was praying the weather would be cooler since I was wearing a borrowed abaya. Women are not permitted to enter the grounds with skin exposed and so I suited up. Trust me, there is no breeze flowing underneath. I was just thanking Allah that I was wearing deodorant! (And so was the woman who had to wear it after me.) 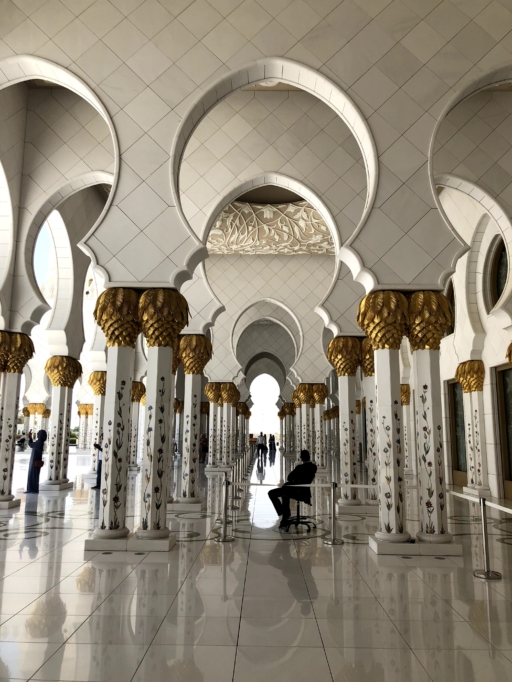 Its lavishness garnered three entries into the Guinness Book of World Records: the largest handmade Iranian carpets made of the richest wools were commissioned to lie on the floor; the biggest chandelier hangs from its ceiling and the largest dome of its kind with an eight pointed crown. Classical Islamic architecture pristinely refined for the modern day. 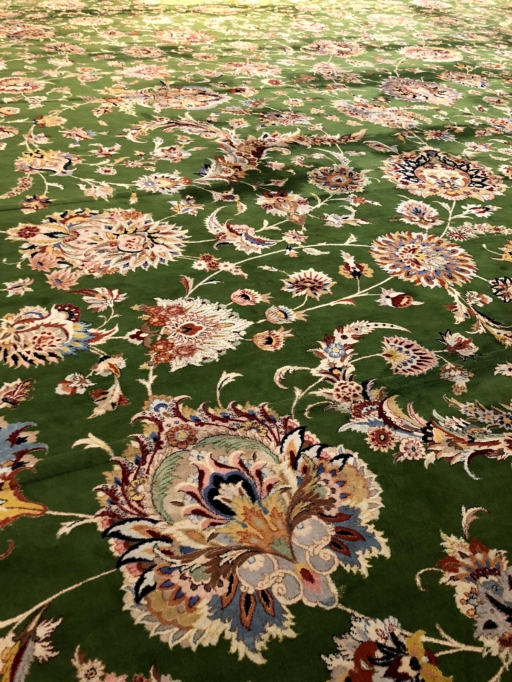 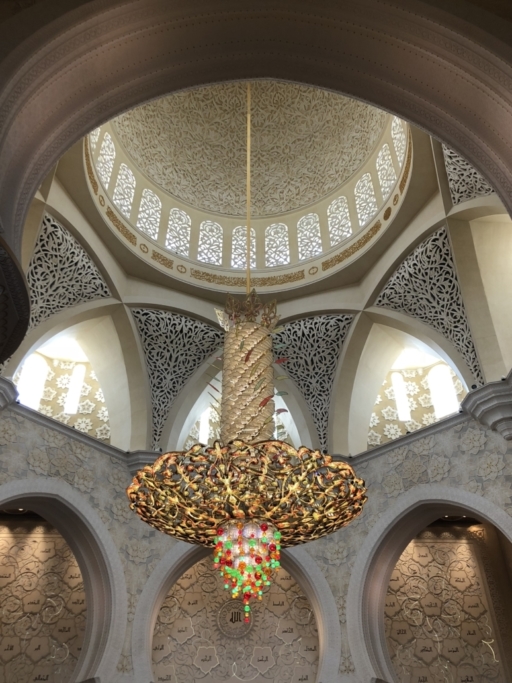 We quickly visited the Abu Dhabi Racetrack where the Formula 1 is raced and then headed over to Ferrari World where Luca was able to sit in a real Ferrari (and milk us for Ferrari souvenirs!)  I tried to negotiate for a new car but that didn’t go as well. Driving back to Dubai we see so many familiar fast food chains: Wendy’s, Chili’s, TGIfs, McDonalds and KFC and as Oscar proclaimed, “We would die without KFC!”

We promised Luca a swim in the pool before dinner so we head to the pool and the beach by 7:00. The pool was beautiful but I was more intrigued with the sea water of the Arabian Gulf that was EASILY 100 degrees! From the minute you put your feet in, it felt like a hot tub. It was so nice on my tired, jet lagged muscles but when we got out (to 95 degree temperature mind you) it was “chilly!” Don’t feel bad. I am just fine. See where my journey takes me next by following here. 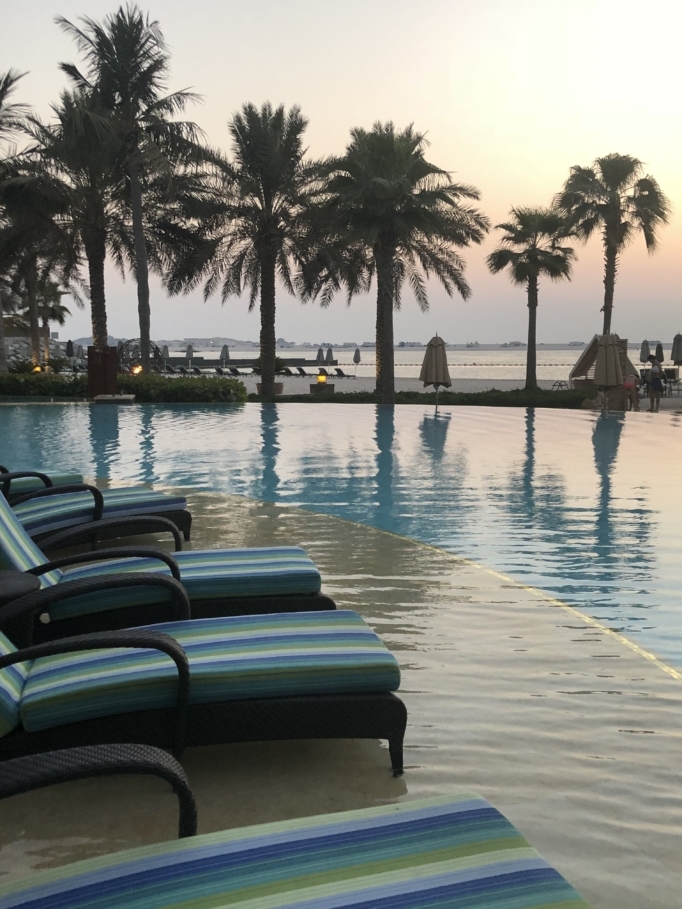