It’s Getting Hot in Here

It’s a trip of a lifetime and at 13 hours business class was a luxurious option allowing us to hit the ground running in Dubai. Luca’s face in business class was priceless- between the seat flattening to a bed and the mattress the attendants offer to put on top! “Mommy,” he said, “I never want to go to that other section again!” (I can’t say I disagree!) My midnight snack of shrimp with wasabi mayonnaise eaten at the bar was a five star treat! He and I sat together and had multiple laughs and waves to one another as he played w the dividing partition going up and down. Hiiiiii!!! Byyyyeeee!! Daddy rested one row ahead.

There are no words to describe the opulence of which we walked into at the Four Seasons Hotel Dubai. Pristine. Clean. Simple and luxurious. I was in awe at the splendor as I entered turning my head in every direction to take in every last detail. 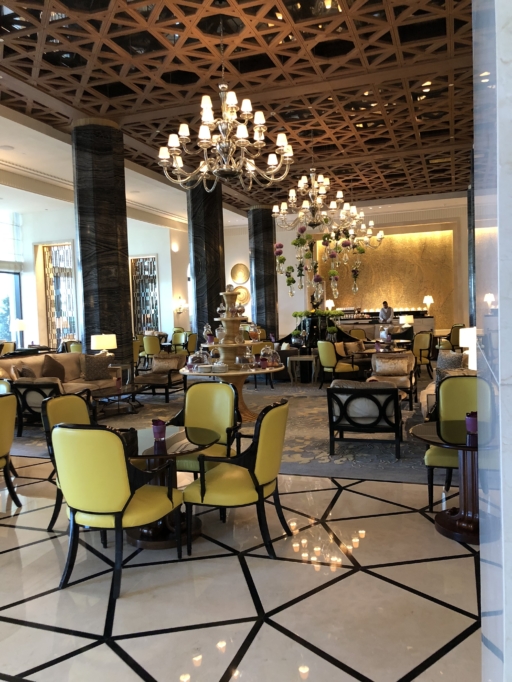 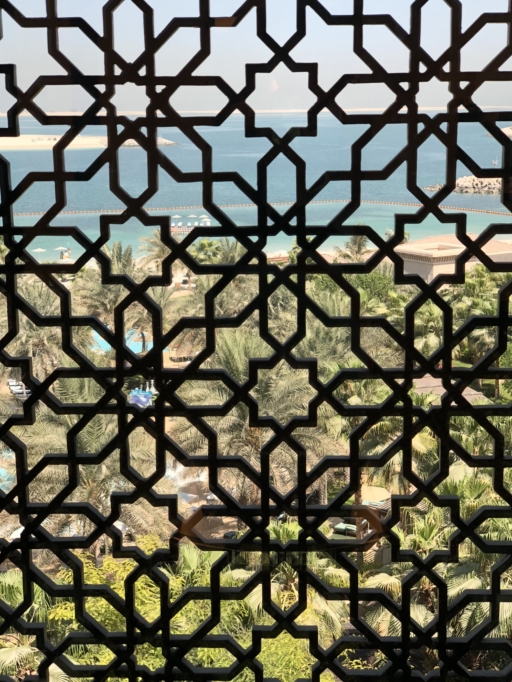 We shower and relax for two hours before our guide meets us at the hotel. She arrives and we’re off! We pass the so called “7 star hotel” – the building shaped like a sail. It was hoping to become a world wonder because of its shape- instead its left wondering why it wasn’t selected! There’s no such thing as a Seven Star Hotel – this is Dubai trying to show up everyone!

Next stop: a small indoor market. We exit the car and immediately are suffocated by the thick blast of heat. It is crazy to think that for the under two minutes we were outside we thought we’d die! The market is an Indiana Jones small, exhibit of local goods, none of which are overly appealing. The smell is that of Frankincense. While the guide tells us it’s a common perfume, I can’t help but think of a funeral. 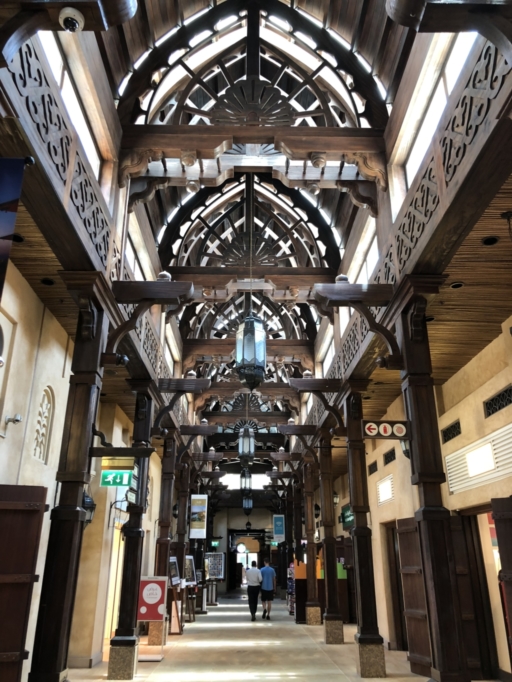 The Emirates Mall boasts Ski Dubai and a variety of American brands that I would never have anticipated: Pottery Barn, Ethan Allen, Virgin Mega Store. Who would’ve thought I’d need to visit Dubai to taste Shake Shack! Mmm! What a delicious chocolate shake!

Culturally I am curious and sometimes inadvertently frightened with the most casual bumping into. It is not habitual to see women fully draped in the deepest black. Women in full black garb, known as an abaya, some with only the beads of their eyes showing; some dressed in black abayas and beige head wraps, others with gold “faceplates” adorning their under eye and upper lip areas. I would later learn that not only is gold emblematic of status, but it also deflects the heat and sun, protecting the more sensitive areas of the face. Are they hot? Do they feel inferior? Are they happy to keep themselves wrapped for “only their man?”

Prayer rooms are common in the public malls and airports as is Muslims kneeling in corners praying towards Mecca. Men dressed in white garb, some with black rings holding on their white headpiece, others with red and white plaid headpiece. At the same time the majority is still dressed in what Americans would perceive as our everyday clothing. Ironically, my initial impression is the country is much more similar to the U.S than I expected. There is an enormous international presence that resides among the Muslim music and call for prayer that is played like church bells five times throughout each day.

Mid-afternoon we reach 44 degrees Celsius, or 112 Fahrenheit – WITHOUT the heat index! It is a heat I am unfamiliar with. As we make our way to the small creek boat, or abra, there is sweat dripping down my back to my legs. Think of the women adorned in abayas! “Little Venice” opens up to the Arabian Gulf but even the breeze from the sail does nothing to cool us off. It is especially brutal as we walk around an outdoor market aplenty with spices and gold. Heat and jet lag have set in and for one of few times in my life shopping is not even appealing. 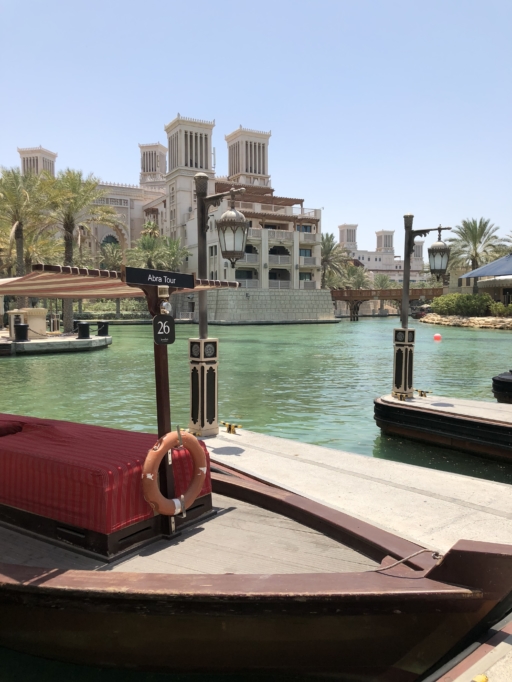 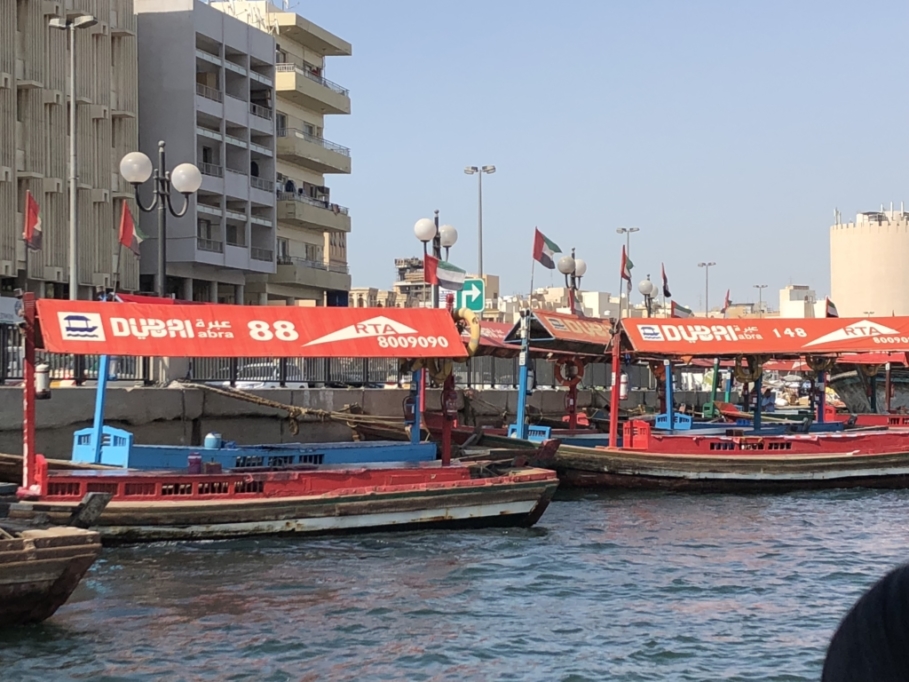 The air conditioned car ride to the Dubai Mall was a welcome reprieve. The Dubai Mall is the 12th largest mall in the world. There is an aquarium, an outdoor dancing fountain synchronized to music, an indoor waterfall and access to the tallest building in the world, the Burj Khalifa. It’s 7:00 pm and at this point in our 24 hour-plus day we are all fading fast. The Burj will have to wait for another visit.

We arrive at the hotel and I am face down on the bed. Stefano and Luca order room service for dinner but this body is done.

Read the rest of my adventures here.