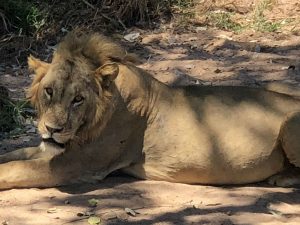 It is 6am and I wake to the feeling of crisp air (and a full bladder. But for storytelling purposes let’s stick w the crisp air.)  It is pitch black inside and out and there are only faint sounds of life outside.

6:18. He chirped and others responded. A faint shadow of the day ahead emerges.

Stefano opens the canvas windows to let the wakening light in and we just chill to listen to the morning chorus of birds eagerly greeting the day. Our senses are keen and overly attentive, not yet dulled from any daily exposure. Just taking it all in.

Let’s talk about the shower. This is not any sort of “bucket shower” I had googled prior to our departure.  I am not hopping into a big basin, nor is there a five gallon bucket over my head, though we do treat it quite delicately after we learn there are “designated hours” to shower – if you want a hot shower that is. There is a tin canister outside of our treehouse that is lit by the staff and warmed by a fire underneath.  It takes only a short while to warm and then this luxurious, interior two head rain head shower splashes down hot wonderfulness onto a solid mahogany lined floor. If this is a bucket shower, sign me up. 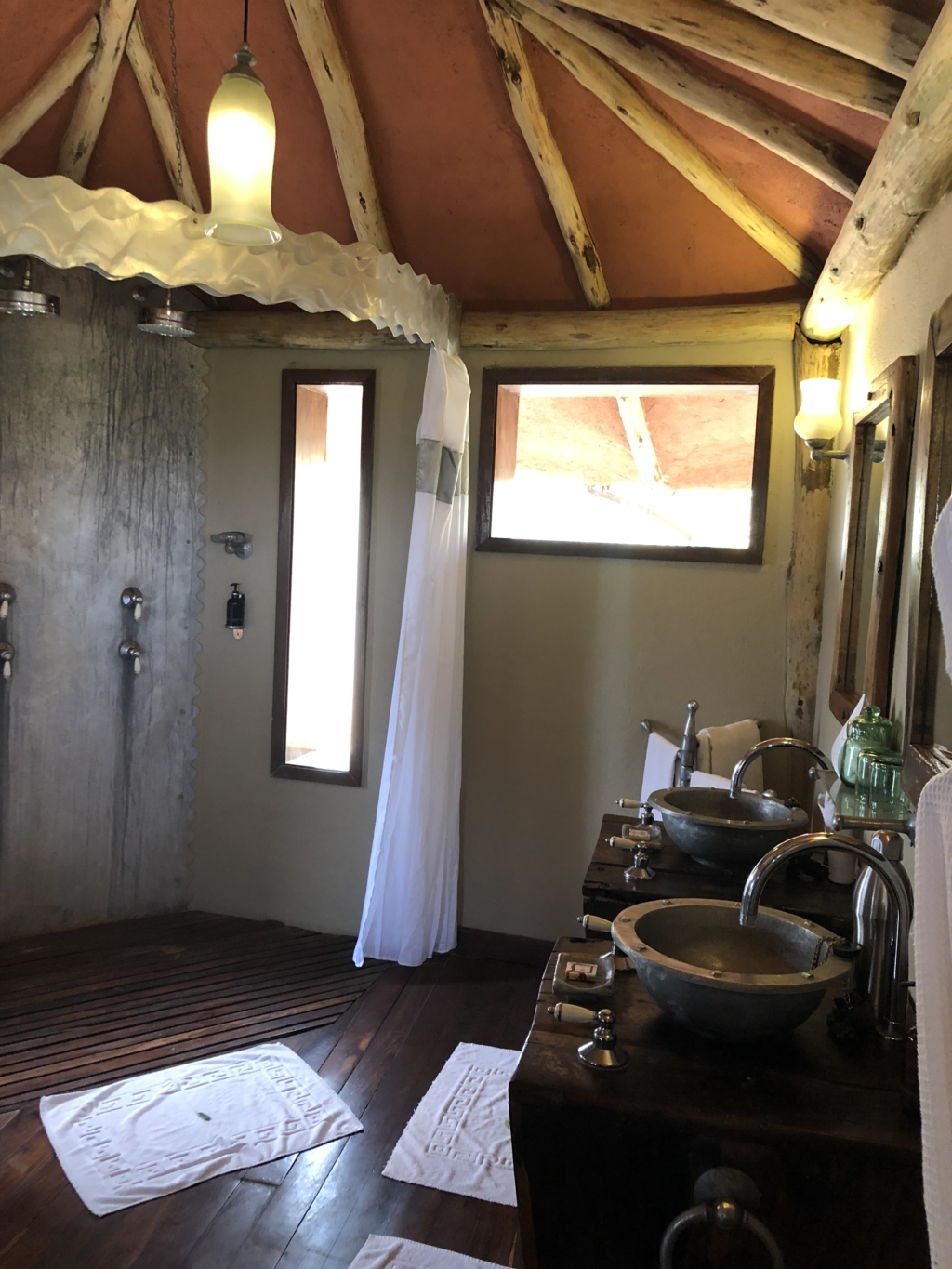 By 8:00am we were heading to the vehicle for our first full day safari!

Hakuna Mattata – it means no worries and is a common response by any of the staff we meet. Spiros is raring to go and scout out what he can. After our 1/2 day game drive yesterday we have already learned the names of several animals and can help spot and identify them.

We were looking for hippos and alas we saw their humps peaking out of the water! Five of them to be exact. Not too close but enough to say we saw them!

We also spotted a lone buffalo which often indicates he is older and can’t keep pace with the herd. He wasn’t far from the lions and we are curious how many days more his life will last.  We learned the male animals generally have horns so that they can defend their territory and fight off predators. We saw countless African Balboa tree- which are hollow inside with a spongy type of wood w edible fruits (that is also used to make juice). As we ride slowly through the Bush I am filled with wonder of how much wildlife we don’t see: maybe we missed them, or perhaps because their natural camouflage keeps them hidden or even our focus on other things nearby is enough distraction to miss them. Hmmm… We stop for an hour for a picnic lunch packed by the Lodge and then resume our drive. We were out from 8:00am-4:00pm without once looking at the clock. It was awe inspiring.

We headed back to the treetops and at the local bar, also known as the lodge watering hole, patience and the natural order of authority were in play. Several elephants were drinking when some zebra and water bucks came nearby. Immediately the lead elephant looked over at them and grunted. They stopped any movement. Elephant went back to drinking. Pause. The water bucks moved forward again. This time the elephant walked towards them and stopped in the middle of them. They froze. The elephants (eventually) finished their beverage and proudly walk away right through the middle of the line of their subordinates. They all stood there frozen.  Luca was staring in amazement and began talking to himself through their hesitation to triumph, “C’mon boys you can do this. Keep walking forward. You can make it. You’re so close. Yeah!” They finally had their turn.

Dinner was an African bbq with a Gaggion favorite, polenta. This was white African polenta prepared with corn from their fields. It was delicious! Earlier in the week we had pulled to the side of the road to purchase an ear of corn from a Villager cooking it on her grill. It was sweet yet the kernels were harder than our locally grown corn- the taste of popcorn kernels but not quite as crispy.

Another evening view of the resident elephant and we were escorted back to our room for much needed rest. 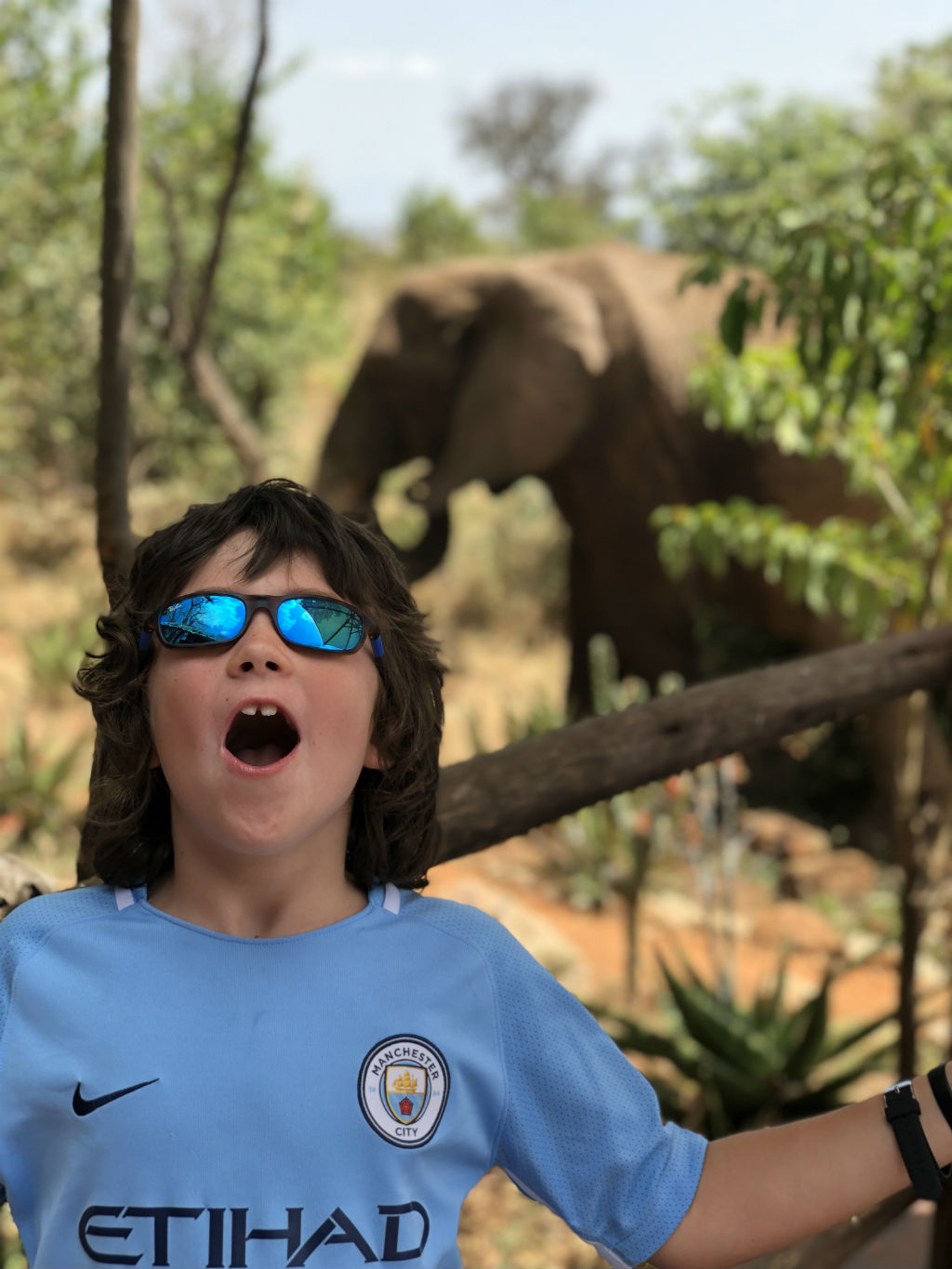 Q. What is the name of a group of Zebra?

A. A Dazzle, because all of their stripes will dazzle you!