Come Out Wherever You Are 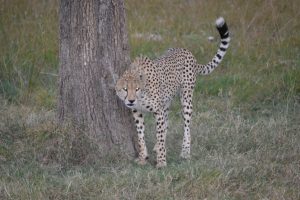 Ahhh, the feeling of a real shower is priceless. And the taste of French toast with vinegar is awful! S took french toast for breakfast and put what he thought was syrup on top. When I got to the table and saw the plate aside I asked why. He explained it didn’t taste good. Aside from it looking fried I tried it. Eww!! It tasted like rotten eggs. Something was clearly wrong. We debated telling the manager, not to be offensive but to ensure nothing was wrong. I finally decided to say something. Shortly after, the manager returns and tells us what S thought was syrup was actually vinegar! Blah!! No wonder it was awful! Turns out it was next to the French toast with no sign and easily mistaken. Though we enjoyed jostling S the manager is now placing a sign near the genuine maple syrup!

We are reminded of the enormity of the Serengeti as we drive 35 minutes through the National Park from the hotel to the inner roads where we can seek out The Big Five: Lion, Buffalo, Rhino, Elephant, Leopards – the top hunters of the wild.  After several game drives what’s exciting now is seeing the animals do something different: wallow in mud, chase another, speak to each other…we “rush” to find what’s next, shaking like a Vitamix all the way.  “I should go now,” advises Limo.  “Rush hour!!!” exclaims Luca. And we are off! Barreling down the dirt, bumpy roads heads bouncing everywhere, windows clanking and holding on for (wild) life – pun intended. “This (drive) is another type of experience,” declares S. “It certainly is,” I reply laughing hysterically as I am holding on for life. There is a cheetah spotting and we arrive in time! 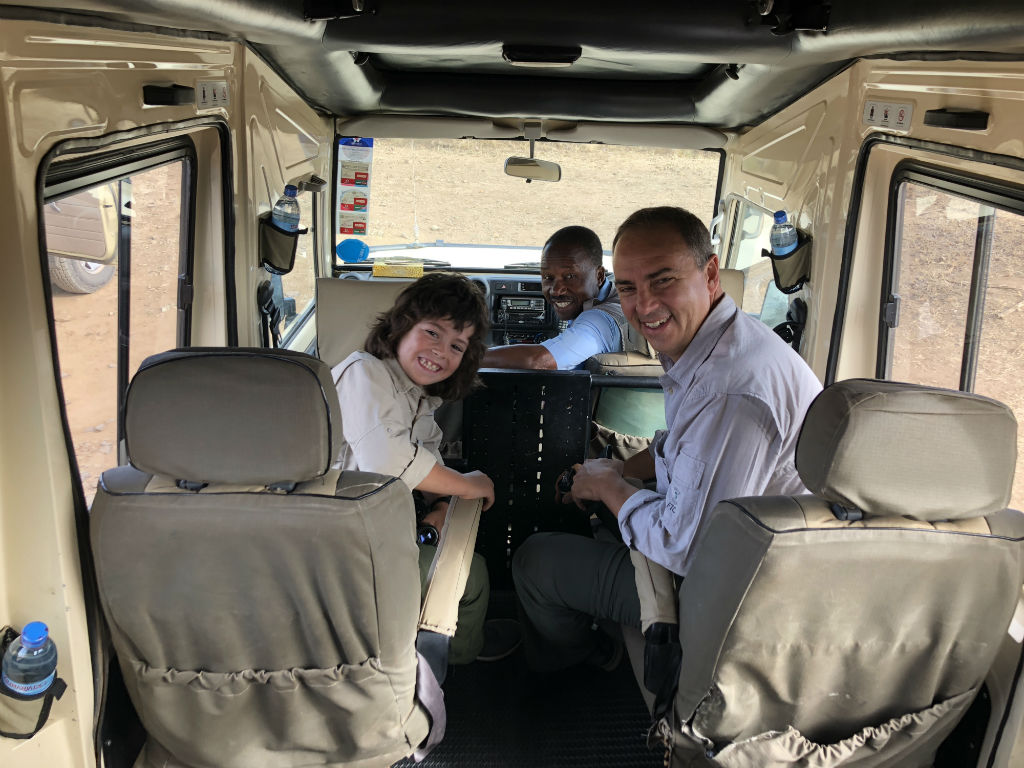 After “Rush Hour” we can rest.

Luca and I have finally become great Safari pioneers. We have officially marked our territory in the Serengeti grasslands!

Me and my love.

It’s a quiet day inside the Serengeti. We drive for hours through the dried, brown grass plains. The dust stirs and the grasses blow. It’s one great big game of Hide and Seek. Ranger radio is silent. Your imagination runs with the wild: dead tree bark looks like giraffe heads and hippo mouths; rock formations like elephants. We are reminded how difficult it is to spot the unusual and how lucky you are when you do. Come out, come out wherever you are. 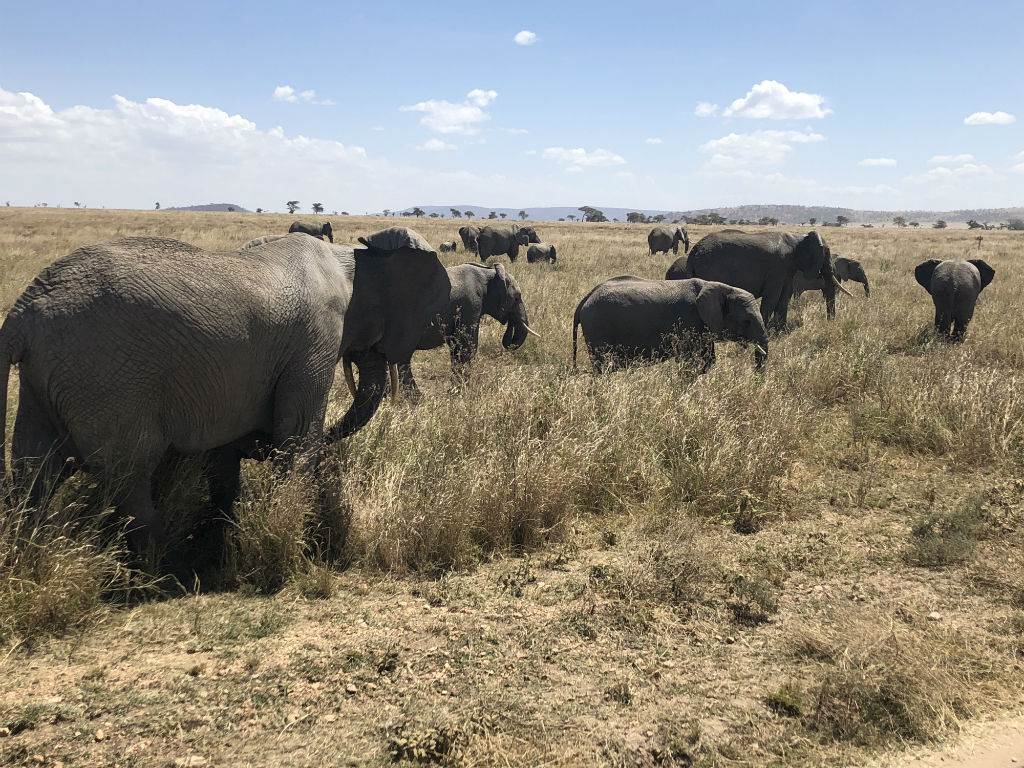 Herd of elephants eating their way through the grassy plains.

We saw five lioness together. Sitting, standing, walking around.  Since we do not see a lot it’s fascinating to get to watch them do anything!

We spotted a cheetah! They are sooo hard to find. We watched it from afar for more than an hour. We couldn’t confirm but it appeared to be eating. Laying in the tall grasses we could only see its neck, head and shoulders bobbing up and down. Each time he lifted his head and sat up we would sigh in excitement. Eventually he walked and we followed. Out of nowhere a jackal then appeared at the former spot of the cheetah- he must have been eating prey! The jackal was enjoying his breakfast when a vulture came down and tried to attack! Major Excitement! 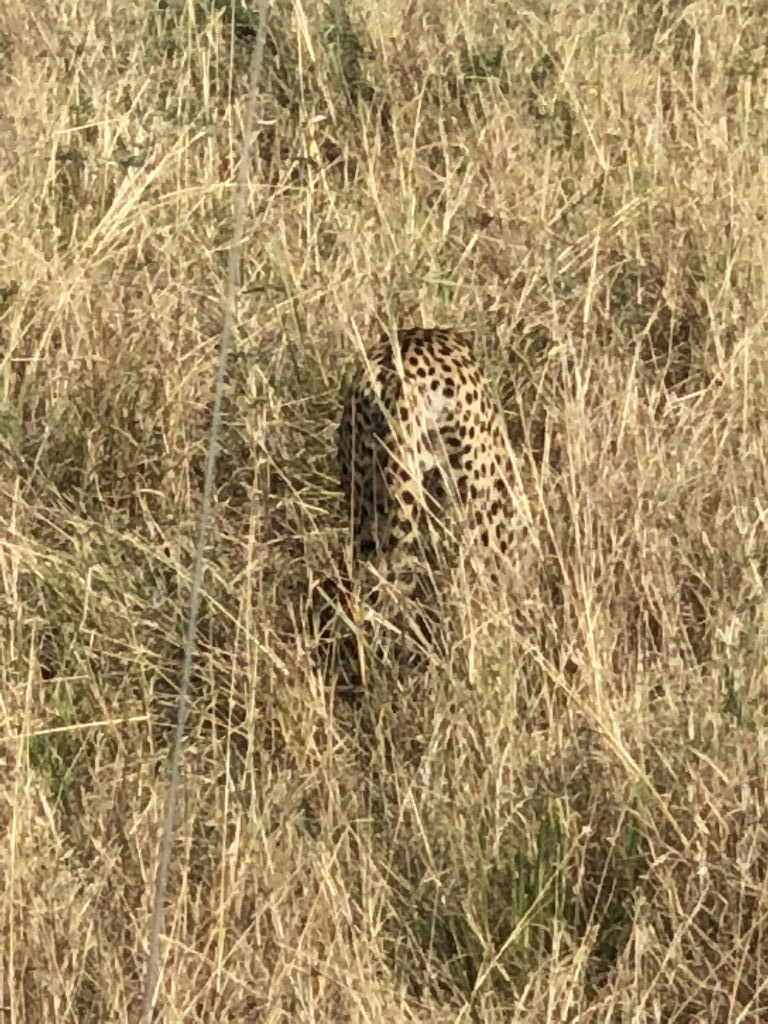 We saw two leopards in the tree! Sleeping, came up for an occasional stretch but beautiful! Another difficult find but worth every second!

Q.  How many buffalo are in the Serengeti National Park?